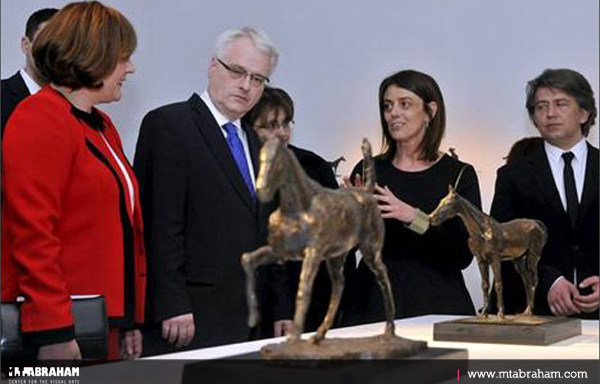 In these hard times, tiptoeing, Edgar Degas’ dancers graciously entered the Klovićevi Dvori Gallery, followed by his rampant horses, and softly nimble bathers. The characters that were Degas’ creative obsession show us the artist who had won numerous fans through his paintings. This time, however, with no color. His dancers, bathers and horses now make his presence known as an unsurpassed sculptor, more so than as a painter. The flat image is replaced by three-dimensional bodies that were initially modeled in wax and plasticine around a hard inner construction.

The subtle material provided him with the possibility to express bodies in motion, which he had studied and researched throughout his life, whether wandering around the stage, walking along horse races, or peeking into boudoirs. He captured those moments, known to us already from his paintings, unset, without posing, without the desire to beautify, such as they were. In sculptures, he gave them space, made them more real. And yet, they almost remained unreal for the public – due to negative critical reactions to his first exhibited sculpture, The Little Dancer (1881). Due to the outrage directed at him, he gave up on the public presentation of his sculpture, but not on further sculpting work. However, that part of Degas’ output remained in his lifetime wrapped in mystery. The famous painter carefully kept his sculpting secret. But the heirs discovered it. Having found that personal treasure trove in wax and plasticine in his studio, they decided to save it by casting it in bronze.

The history of Degas’ sculptures on the way from the darkness of the studio warehouse to the bronze statuettes and audiences in famous museums reads like a mystery novel, taking the sculptures from the original wax and plasticine models, through plaster casts, to bronze sculptures. This winding road took several decades. But, it was worth it. It showed us an Edgar Degas we had not known. It discovered an even stronger artist. And it defeated the initial criticisms. A new evaluation of this denied portion of the artist’s work brought a reversal. His sculpting work was assessed as the most modern part of his oeuvre. Making this sculpture treasure available to Croatian public was a great endeavor for the Klovićevi Dvori Gallery, particularly in the year which marks the thirtieth anniversary of successful work. The exhibition opens March 15, 2012.